#IntotheWild: A Tribute to a Crazy Dude 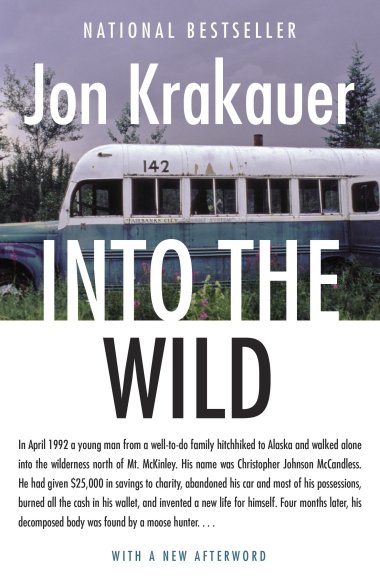 My Rating: Three out of Five Stars

Both of us agree that Jon Krakauer’s investigative journalism work is AMAZING.  Truly impressive.

We also both have the same feelings about the star of this show:

In the early 1990’s Chris McCandless graduated from Emory University.  Without telling anyone his plans, he donated the $25,000 in his bank account, burned the money in his pockets, hid his car in the woods, and spent the next 2 years wandering the country, living off the land and the goodwill of others.

He canoed down the Colorado River, into Mexico, and found his way to the Gulf of California.  He worked the wheat fields of South Dakota.  He lived in campgrounds in Arizona.  He traveled from Atlanta, to California, to South Dakota, back to Arizona, and back to South Dakota.  His magnetic personality earned him friends where ever he went.

He was obsessed with Henry David Thoreau and his transcendentalist philosophies of the power of the individual, personal freedom, and nature as a key to understanding the world.

He was an admirer of Leo Tolstory and Jack London… London so much so that he couldn’t get the idea out of his head that going to live alone in the Wilderness of Alaska would be the gateway to enlightenment.

Into the Wild is a case study on outstanding investigative journalism.  Jon Krakauer meticulously retraced Chris McCandless’s steps, finding the people he talked to, piecing together the last two years of his life, and understanding his motives.  The detail Jon Krakaur was able to tease out was incredible, especially considering the lengths Chris McCandless took to be invisible.

Krakauer’s obsession with McCandless was more than I was interested in, however.  I think McCandless was nuts.  Krakauer thought he was brave.  I don’t think we would get along.

My 10th grader’s going to have plenty to write about.

A small handful of 4-letter words.  No sex or violence.  I found some chapters too boring to bother with.