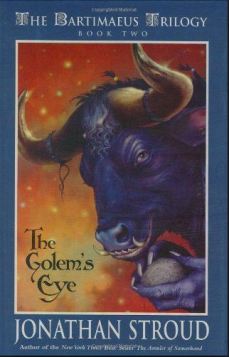 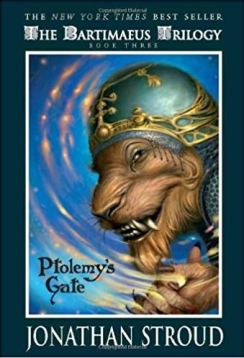 I recently was wildly impressed by Jonathan Stroud’s Lockwood & Co series. If you haven’t read that, you are missing out on some Harry Potter sized fun. Go now.

Fueled by the feeling I’d discovered something brilliant and new, I wasted no time jumping into Bartimaeus, the other (earlier) series by Jonathan Stroud.

I should have known book lightening wasn’t going to strike me twice.

Actually, that’s probably harsh. The Bartimaeus trilogy was actually quite good. It’s nothing like Lockwood & Co, however, and therefore Bartimaeus has to learn to live in the shadow cast by its hero-sized big brother.

Here’s what was great about Bartimaeus: Picture alternative modern London, ruled by magicians who get their power from the ancient demons they enslave…djinn, for example. The English Empire is the world superpower because they have the strongest magicians. Government is ruled by magicians who live in luxury, while the commoners are forced to labor and live as the lower caste constantly in fear of drawing the ire of the ruling class. There’s one young magician’s apprentice–smart, ambitious, and more talented than the rest–who shows signs of being the one who can change things. Maybe he’ll be the one to rise up.

Magic, mystery. Revolution. Kids who save the day.

Here’s what I didn’t like: This is a cool setting for a great story about a privileged who, realizing the injustice in his world, comes to the aid of those less fortunate to help them overthrow the oppressive regime. But…

I had hoped that over the course of the trilogy, ignorance would give way to understanding and heroes would rise.

They did, but in the end it was too little to late.

I liked it enough to finish, though, and I bet you will too.