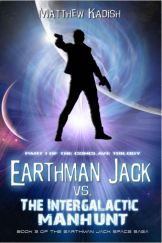 Rating: Five out of Five Stars for all three

You guys really need to meet Jack. Book 3 (and 4 and 5) are out today, and Jack still rocks.

Back in 2013, Hugh Howey—indie author extraordinaire and vocal advocate for self-published authors—shared a letter on his blog from some guy named Matt Kadish who had written a book and self-published it on Amazon. Hugh Howey hasn’t lead me wrong yet, so looked up Matt’s book on Amazon…600+ pages for $.99? Harry Potter meets Star Wars? Uh…duh. I downloaded Earthman Jack vs. The Ghost Planet immediately. And then didn’t read it. For like a year.

I can’t remember what made me finally pick it up, but I can tell you that once I got going I plowed through it. It was a blast to read! (Read my original EJ1 review here). I Immediately went back to the beginning and started again, this time reading out loud to my kids—and they loved it as much as I did.

I’d found a rare thing. I’d found a self-published book that deserves to be read.

Book 2, Earthman Jack vs. The Secret Army, came along in 2015, and once again it struck all the right notes. Action, drama, intrigue, great characters, and laugh-out-loud dialogue sprinkled through out. No sophomore slump for Earthman Jack.

Now we have book 3, and I’m happy to say that streak continues. It’s an expectation at this point. If fact, it ended up being so packed full of awesome that it had to be split into 3 separate books:

I love Jack and my kids love Jack. The only reason you and your kids don’t love Jack is because you haven’t read about him yet.

5 Star Reads!, Adventure, Best for 12 and up, Book Reviews!, Middle Grade, Science Fiction
← #AllTheseWorlds (Bobiverse, #3): Cheap and Easy. And Awesome.
→ #TheWayofKings (Book One of The Stormlight Archive): The Best Fantasy of the Day. Mic Drop.