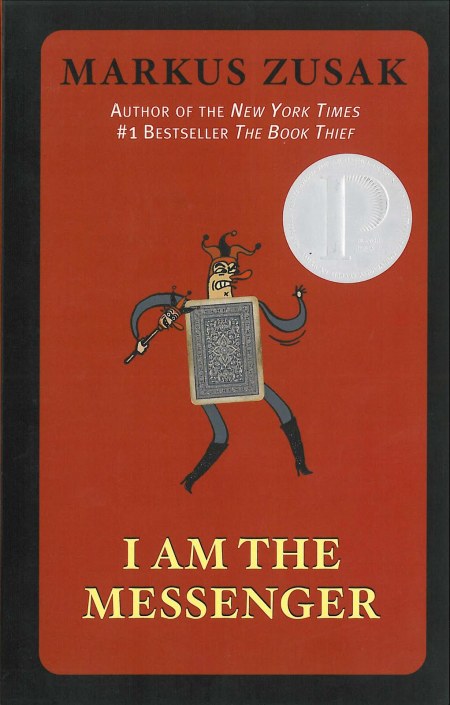 I Am the Messenger
By: Markus Zusak
My Rating: FIVE out of FIVE Stars

If you read what I thought of The Book Thief, you know I am a pretty big fan. Markus Zusak wrote a book unlike any I had ever read before. I wondered if his other books could be just as good, so I picked up I Am the Messenger.

I was blown away again.

In Aussie Zusak I feel like I’ve my next favorite author.

I guess I would call Messenger “realistic fiction.” There’s no fantasy, science fiction, or even historical drama. It’s just a story about a guy–an extremely ordinary guy named Ed.

That is, he’s ordinary until he isn’t.

After uncharacteristically foiling a bank robbery, Ed starts receiving puzzling notes written onto playing cards. The notes lead him to people, and each time he finds a message to deliver. Sometimes the messages are hard for Ed, other times they are easy, sometimes they’re really, really hard.  But, every time the message Ed delivers improves the life of the recipient. Along the way, Ed learns about himself…

…and just how extraordinary an ordinary person can be.

As with The Book Thief, I was blown completely away by the beauty of the writing. For Markus Zusak, words have power, and once again he expertly uses the power of words to move his readers. Just as when I wrote my thoughts on The Book Thief, I feel wholly inadequate using my words to describe his.

A few of my favorite from I Am the Messenger:

–She even touches Jimmy’s face on the photos, and I see what it is to love someone like Milla loved that man. Her fingertips are made of love. When she speaks, her voice is made of love.
–She soon says, “You’re my best friend, Ed.” “I know.” You can kill a man with those words. No gun. No bullets. Just words and a girl.
–I don’t leave a note. There’s nothing else to do. At first, I’d wanted to write Merry Christmas on the box somewhere, but I decided against it. This isn’t about words. It’s about glowing lights and small things that are big.
–Sometimes people are beautiful. Not in looks. Not in what they say. Just in what they are.

There are a lot more words where those came from.

The book has a great ending too. I’m a sucker for surprise endings, and this one ends with a fantastic puzzler that will make you stop and think–you might even need to re-read the end a couple of times before you finally get it.

If the writing and the story aren’t enough for you, then the cool, twist ending should convince you. I thought I Am the Messenger was a wonderfully enjoyable read. So good, in fact, that I’ve given it a revered place on The Greatest of All Time shelf. Be cautioned that there are several S-H words you’ll encounter. Despite that, I highly recommend it to my fellow book lovers everywhere!

Support One Man Book Club by getting your copy here!