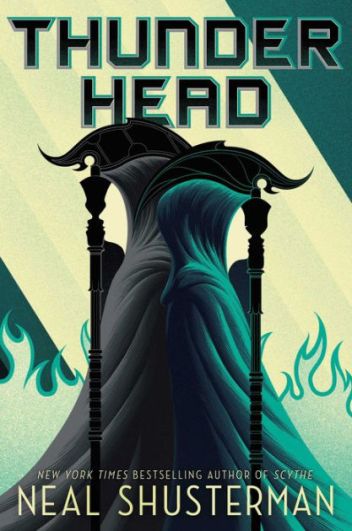 Thunderhead (Arc of a Scythe, Book 2)
By: Neal Shusterman
My Rating: FIVE out of FIVE stars
Best for: Advanced 14 and up

How’s this for our future:

The “Cloud” grew up, became sentient, and took over the world. We call it “Thunderhead.”

Thunderhead is an impartial, flawless, and benevolent AI. Humans turned stewardship of the world over to Thunderhead, and found peace and prosperity. No government. Everyone is happy. Weather is controlled. Resources are perfectly managed. Disease is abolished. Our biology is optimized to control our pain and our emotions. Age can be reversed. Humans are immortal.

Humans have giving life under control. But the taking of life when humans are immortal?

That’s what the Scythes are for.

The Scythes have the high responsibility of stepping in for nature. People used to die naturally. Now Scythes are responsible for population control by selecting people to glean–the only permanent death left in the world. Their sacred charter demands their responsibilities be carried out by Scythes of the highest moral character, with deep contrition and genuine impartiality.

But not all Scythes fit the mold.

This trilogy is about killing people. Book 1 was uncomfortable because of its careless attitude about death. But by book 2, I felt so immersed in this future that I understood: death is no longer the fearsome specter it was when we were mortal.

What would you do if you didn’t fear death? If you never died? If you could grow old, then de-age yourself back again? What decisions would you make? What would become most important to you?

In the end, the Arc of a Scythe trilogy is simply impressive in how much it made me think. It’s a commentary on society in the vein of 1984 and Brave New World, but disguised as a YA distopian future trilogy.

I’m not just a little impressed. After book two, I’m an outright fan.

It’s well written and moving, but not for the faint of heart. No sex, PG language, even mild violence considering the topic. But it is heavy, and and interesting commentary on the sanctity of life.