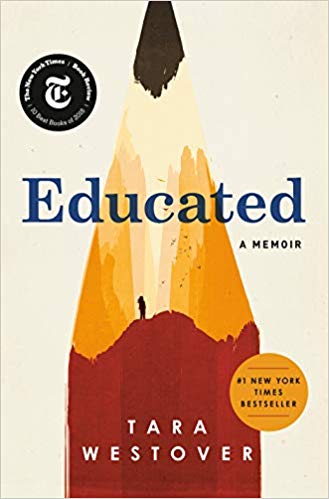 Educated
By: Tara Westover
My Rating: Four out of Five Stars
Best for: 14 and up

Tara Westover was raised by survivalist/fundamentalist parents. Untrusting of government or modern medicine and misunderstand what it means to have faith in God, Tara’s parents opted to let her and her siblings learn lessons from life instead of school. They relied on her mother’s knowledge of herbs, oils, and auras to heal even traumatic injuries.

Why wear seat belts or wash your hands after going to the bathroom if you have faith God will protect you?

She was emotionally abused and spiritually manipulated by her parents, and physically and mentally abused by a brother.

Tara decided she’d had enough. She bought an ACT study guide so she could sit for a college entrance exam. When she found out she didn’t know algebra, she bought an algebra text book and taught herself Algebra. She needed a 27 on the exam. She scored a 28, and was accepted as a freshman at BYU when she was 17.

It was the first time she’d ever set foot in a classroom.

Tara went on to earn prestigious scholarships to BYU, Cambridge, and Harvard. 10 years after she started as a 17-year-old freshman, she became Dr. Westover after earning a Ph.d in History. She’d conquered learning, but still battled the emotional damage she suffered by her parents and her brother.

Her journey to find herself and escape the emotional bonds was her true education.

Tara’s story is inspiring. She was an underdog. She rose up. She overcame.

There are critics and naysayers. Tara’s account is very one-sided, and I get the sense the facts may have been dramatized or spun to fit her narrative. I certainly see this in her portrayal of Mormonism as represented by her parents and others she meets. Why does Tara keep going home when she knows nothing has changed? Why does she continue to put herself in one-on-one situations with her abusive brother? I cannot judge. Tara’s perception is her reality. This is a memoir, not a deposition.

She came from nothing, and made herself into something. She didn’t get an education. She educated herself.

Best for 14 and up. Some swearing, depictions of physical and mental abuse, and descriptions of gruesome injuries.

Best for 14 and up, Biography, Book Reviews!, Great Stand-Alones, Memoir
← Who Wants a Free Audible Audiobook?!
→ #Forward: Tomorrow is today.