Empire of Storms (Throne of Glass, #5) 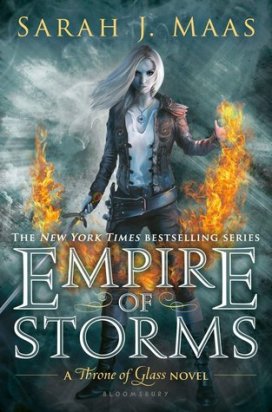 Empire of Storms (Throne of Glass, #5)
By: Sarah J. Maas
My Rating: ONE out of FIVE stars

I’m completely disgusted. I’ve recommended this series to so many people.

I take it all back.

I have no idea how the back half of this book is, and I’ll never know because I’m not going to read it. I do have some thoughts about the first half, though.

The story used to be told from the POV of one or two, sometimes three characters. This is a fun way to tell a story. Now the narrative shifts between EIGHT characters. That is never fun. In fact, it’s ridiculous.

Now that story gets a back seat so all those EIGHT characters can describe their smoldering, angsty, unwarranted, forced, unnecessary, obsessive, Bella-and-Edward-ish, unsuppressible physical attraction to one another. Barf.

Clearly I am no longer the target demographic for this series.

And so the first 50% of this story meanders along with the characters lusting after each other, occasionally showing glimpses of what used to make the story cool.

“She popped the third and final button free and he let go of her to toss his pants into the sand nearby, taking his undershorts with them. Her mouth went dry as she took in the sight of him.

“Rowan had been bred and honed for battle, and every inch of him was pure-blooded warrior.”

I was warned about what came next, but I thought it surely couldn’t be that bad.

This fun, PG-rated story, begin with Throne of Glass and those awesome prequels. They were clean enough and exciting enough that I recommended them to my own kids as well as my friends and their kids. More books were published, and the story got a little edgier and little more violent. Some bad language crept in. The love interests got a little more mature. By book 4 the series was easily PG-13. Book 5, I expected, would continue with the trend. And I was right–I just didn’t know how right. It skipped R and went straight to pornography.

If I want to read pornography I’ll read 50 Shades.

So now I’m done, and I’ll be using my influence and readership to warn everyone I know.

One response to “Empire of Storms (Throne of Glass, #5)”