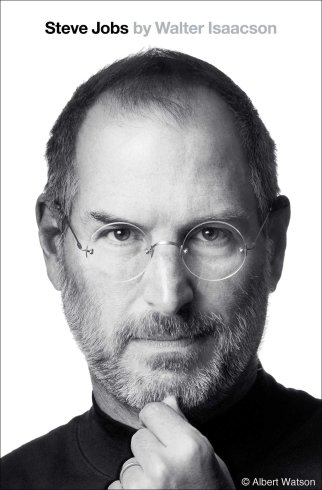 Steve Jobs
By: Walter Isaacson
My Rating: FIVE OUT OF FIVE STARS
Best for: 16 and up

Steve Jobs THE BOOK was one of the most interesting, well written, entertaining, well researched, and educating biographies I’ve ever read! Walter Isaacson covers all the parts of Steve Jobs life, experiences, and personality I care to know. I’ve read some reviewers who complain there isn’t enough on SJ’s upbringing and family life, but I thought the balance was perfect.

Steve Jobs THE PERSON was a drugged out hippie and an even bigger jerk than you could imagine. The guy was mean and weird, and while he was an extremely unlikeable guy, it was impossible for me to not be floored by his genius and his record of accomplishments.

Consider a few (of a very many!) of my favorite quotes from the book.

–“This is a book about the roller-coaster life and searingly intense personality of a creative entrepreneur whose passion for perfection and ferocious drive revolutionized six industries: personal computers, animated movies, music, phones, tablet computing, and digital publishing. You might even add a seventh, retail stores, which Jobs did not quite revolutionize but did reimagine.”

–In 1982: “At the end of the presentation someone asked whether he thought they should do some market research to see what customers wanted. ‘No,’ he replied, ‘because customers don’t’ know what they want until we’ve shown them.’ Then he pulled out a device that was about the size of a desk diary. ‘Do you want to see something neat?’ When he flipped it open, it turned out to be a mock-up of a computer that could fit on your lap, with a keyboard and screen hinged together like a notebook. ‘This is my dream of what we will be making in the mid-to late eighties,’ he said. They were building a company that would invent the future.”

–“Because the people who are crazy enough to think they can change the world are the ones who do.”

–“Was he smart? No, not exceptionally. Instead, he was a genius”

–“Steve Jobs thus became the greatest business executive of our era, the one most certain to be remembered a century from now. History will place him in the pantheon right next to Edison and Ford. More than anyone else of his time, he made products that were completely innovative, combining the power of poetry and processors.”

Here is a list of what can thank Steve Jobs for (there’s more—this is just off the top of my head):

1) The personal computer
2) The mouse
3) The Graphical User Interface on your computer. This includes commonplace things like the desktop, the trash can icon, folder icons, a piece of paper icon denoting a file, and the ability to “drag and drop.”
4) Fonts
5) Pixar. Seriously, Pixar is just as much of Steve Jobs creation as was Apple. There would have been no Woody and Buzz, Lightening McQueen, Nemo, or the rest of the Pixar gang if not for Steve Jobs.
6) iPod. And not just the iPod, but he revolutionized the entire music industry.
7) iTunes. The book says he saved the music industry.
8) The affordable and user friendly touch screen.
9) “A widescreen iPod with touch controls, a revolutionary mobile phone and a breakthrough internet communications device. An iPod, a phone and an internet communicator.” Of course, it was all three of those things in one — the iPhone.
10) The App Store. World is changed. There’s an App for that.
11) iPad. Not a tablet computer, the next generation of laptops.
12) Apple Stores. He redefined what a retail shopping experience should be.

There’s more too, trust me. You’ll just have to read the book to really understand. I feel smarter because I read this book.  Discerning readers, beware: there’s quite a bit of language in the book–37 instances of sh** (every 18 pages) and and 28 instances of f*** (every 23 pages).