#FuzzyNation: Ewoks are people too… 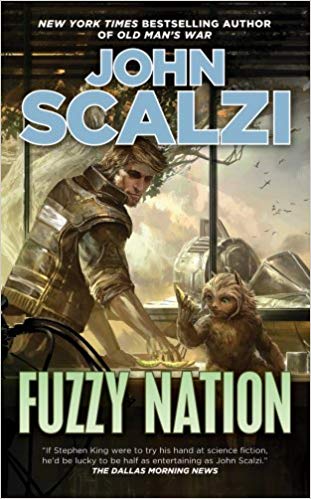 Fuzzy Nation
By: John Scalzi
My Rating: FIVE out of FIVE stars
Best for: 14 and up

While I always expect to be impressed by John Scalzi, I wouldn’t ever expect to tear up, laugh out loud, or stand up and cheer at the end of a Scalzi book.

But…surprise to me–all those things happened by the end of Fuzzy Nation.

Fuzzy Nation has that 60’s science-fiction vibe, but thanks to Scalzi’s updated characters and science, it comes across as very modern. And very awesome.

In the very far-off future, corporations can buy the rights to Excavate & Exploit the resources of distant-planets…as long as there is no sentient life on the planet. ZaraCorp owns the E&E rights to Zara XXIII, and are particularly thrilled that an obscenely large source of the universe’s most rare and valuable mineral was just discovered there. Of course, the same day of that discovery, the lead prospector who discovered it also discovers the Fuzzies–think bipedal cats or small Ewoks that can actually emote and don’t look demonic or creepy.

Surely the Fuzzies can’t be sentient–that would mean ZaraCorp would lose out on trillions. It would also make for a really clever scyfy courtroom drama where the evil corporation fights against the heroic Fuzzy lovers over the definition of what makes a person a person.

That’s what Fuzzy Nation is, and I loved it.

Scalzi is known for having a potty mouth, but this one is actually quite tame. Because of some language I’d recommend this for 14+. Also, it’s less science fiction and more courtroom drama–apparently John Grisham better watch out for John Scalzi, because man–Scalzi can write!

Happy Friday Book Club! What reading is happening at your house this weekend?
#TheFirstGirlChild
And other times they're about #starwars...
Hey Book Club! I hope you'll join me and fellow book clubber Tracy Michelle Hall Cole for a panel discussion on the importance of reading with children tomorrow, May 13th, at 11am cst.
#relateable
Sheldon always knows.